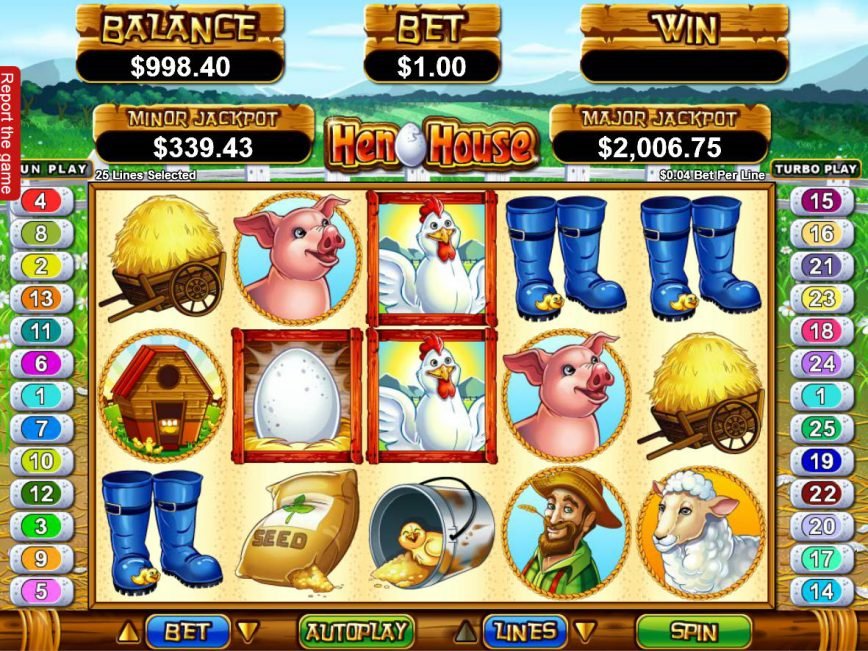 Want to feel the joy of farm life? Play Hen House online slot game and spend some time at a wonderfully created virtual farmhouse. Developed by RTG, the 5-reel and 25-payline comes with bright graphics and some cute looking animated characters. Apart from this, the game features wild, scatter and a cash prize of 5,000 coins triggered by five rooster icons on a line with the max stake.

If you want some big wins, then you should play the game with the maximum betting stake for maximum payouts. Constantly increasing progressive jackpots are also there to fulfil all your wishes. Read More

Make the Most Out of This Cash-Rich Poultry Farm

All the symbols featured in this slot machine are highly related to the poultry firm, as you can spot the icons of a fox, a sheep, chicken, hen and a rooster. The hen is the wild here, while the egg icon plays the role of scatter. The wild appears on reels 2, 3 and 4 and the icon replaces others except for the scatter to form winning combinations. Scatter triggers the Henhouse Pick bonus feature and all wins formed with the scatter are multiplied by your total stake. The rooster is the highest paying icon of the game, and you can win the cash prize of 5,000 if you can bring five of the icons on a line with maximum bet.

Three or more scatter icons anywhere on the reels trigger the Henhouse Pick feature. Here, you can win three features (Golden Egg, Rotten Egg and a Bonus icon) through 9 hens in the house. 5 free games and x1 win multiplier are awarded to you at the beginning.

If you can reveal a bonus icon, the icon acts as an extra substitute during free games. You Henhouse Pick feature ends if you get a Rotten Egg. You can retrigger the feature, and 5 free games are added to the feature with any retrigger.

Hen House is all about a cash-rich poultry farm, where you can reveal a number of exciting cash prizes. It has wild, scatter-free games, win multiplier and two randomly triggered progressive jackpots (mini and major) that altogether can make your slot experience unforgettable.