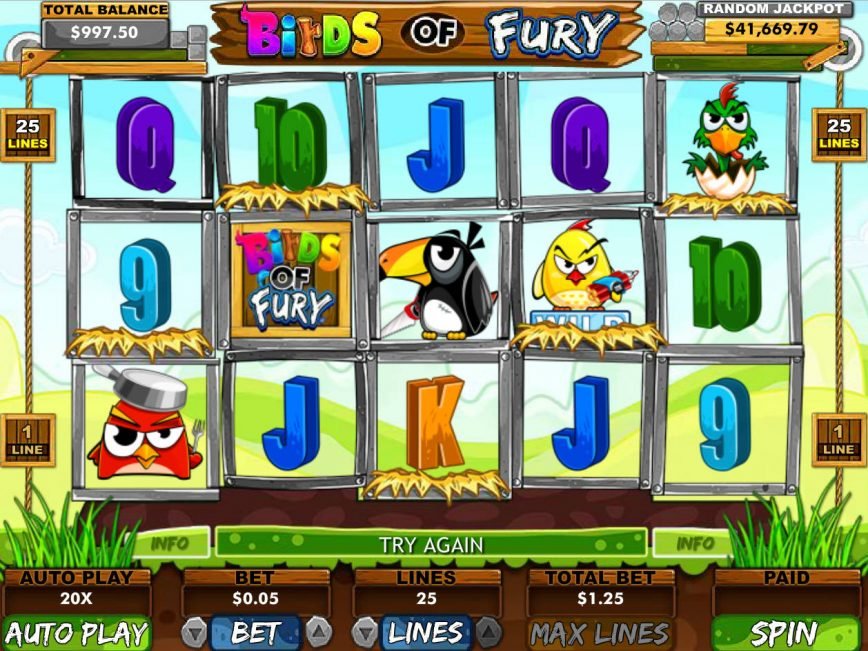 Birds of Fury is a 5-reel and 25-payline online slot machine that can remind you the popular mobile game called “Angry Birds”. Developed by RTG, the slot has represents some angry looking birds through its reels and with each of the birds you can form some lucrative winning combinations.

Some colourful birds occupy reels, and each of them has come with different symbol value. The wild is the best-paying icon of the game, as the yellow bird pays you 1,500 coins on the max stake. Likewise, the black hornbill comes with a cash prize of 1,000 coins, as the second best prize of the base game. Apart from the regular payoffs, the slot gives you chances to trigger free spins and multiplier. Read More

Bring Your Lucky Birds on the Reels and Win Prizes

Apart from some regular bird icons on the reels, the slot gives you chances to enjoy the advantage of wild and scatter. The yellow bird plays the role of wild, while the game logo acts as a scatter here. Wild pays the best prize of the game, and it replaces other icons except for the scatter to form winning combos. The scatter pays in any position, and the total stake multiplies all winning combinations formed with scatter.

Random triggering of the bonus feature happens following the end of a successful spin. During the feature, all scatter icons in the view become wilds. The feature adds two extra wilds on the reel window. One cannot replace regular wilds with extra added wilds during the game. Here you can trigger the feature not more than 2 times.

The win multiplier can be added randomly at the beginning of a spin where the wins can be multiplied by 2x, 3x, 4x or 5x. The multiplier can multiply any Pick or Wild wins, but the feature does not work during the free spins bonus game if you have activated the bonus game on a triggering spin.

Three blue eggs can come on the reel window after a win, and you have to pick one to reveal awards.

Birds of Fury is a feature-packed slot game that comes with a randomly triggered progressive jackpot. The game has plenty of exciting features. Base game payoffs are quite nice, while free spins and win multiplier can add more twists to your playing experience.