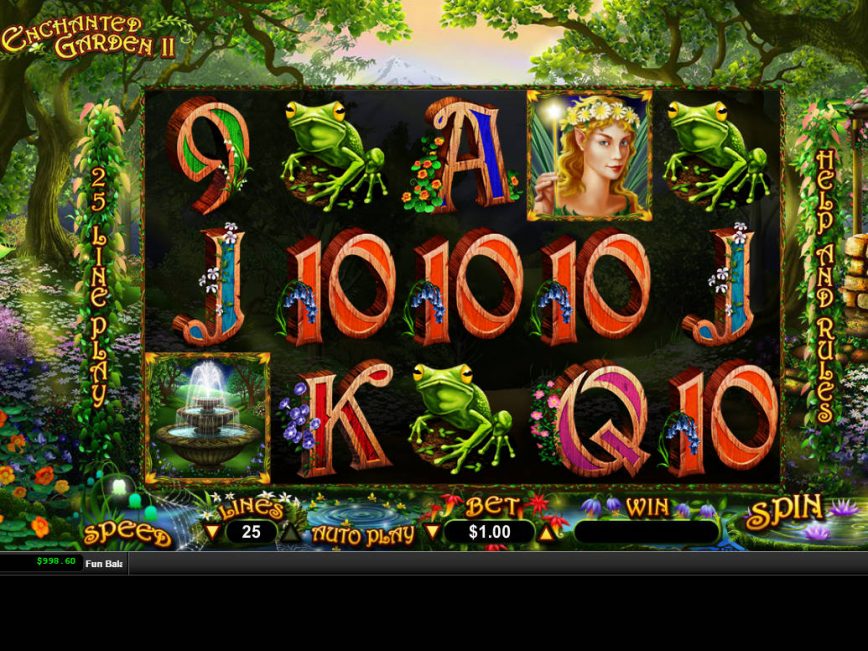 RTG has come with the sequel of Enchanted Garden online slot machine with Enchanted Garden 2.  The fairytale-themed slot involves a beautifully created mystic garden. The slot features a wizard, who can pay the cash prize of 5,000 coins if you can form a combination of five identical icons with the wild.

The slot is about exploring treasures in a beautifully animated fairy garden. Each of the icons featured in this slot gives you chances to win some mind-pleasing cash prizes. The fairy princess is the wild here, while a fountain plays the role of scatter. Read More

Roam Around the Garden of Mysteries and Treasure

Along with some theme-related high-paying icons on the reels, the slot features wild and scatter that help to activate bonus features. Five wizards with a wild pay 5,000, while five rings with a wild award the cash prize of 2,000. The wild comes on reels 2, 3, 4 and 5 and replaces all other icons except for the scatter. Also, it multiplies any win formed with scatter icons by your total bet.

A special feature is triggered when you bring a scatter on reel 1 and wild on reel 5. Here, you have to pick the fairy princess to activate the Fairy Feature or Fairy Queen Feature.

Here, you can win seven free games, and you get an award of extra 3 free games when three or more symbols with firefly land anywhere on the reels. It triples all prizes formed during the bonus game. You cannot retrigger the feature.

This feature awards you 10 free games with additional princess wilds on reel 2, 3, 4 and 5. Here, you can win extra 3 free games by landing three or more symbols with firefly anywhere on reels. It triples all wins triggered during the bonus game, and there is no chance to trigger the feature again.

The fairy-themed slot game gives you chances to win a cash prize of 5,000 coins. Here, each of the icons can bring some attractive cash prizes, while bonus features like free spins and multiplier are there to provide you more winning chances.