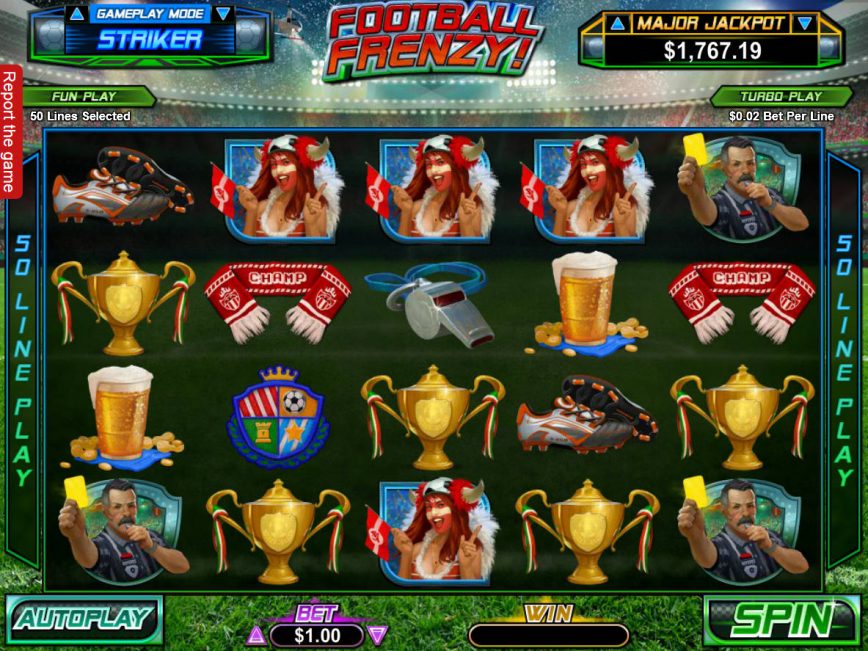 Real Time Gaming has captured the fever of football within a 5-reel and 50-payline online slot machine that not only takes you to the field of world’s biggest football tournament but also gives chances to win a progressive jackpot. Apart from base game payoffs, the slot features some bonus games that can easily enhance the level of excitement.

Here, you can play the game with two different play modes; Striker and Lucky, where you can secure free games, win multiplier or another bonus feature. The football and the player are the best paying icons of the game, as each of them can pay you the top cash prize of 1,000 coins in the base game. Read More

Be a Part of the Crowd and Enjoy the Game

As the name suggests, the slot is all about the craze of soccer, as you can find some football-related icons on the reels. Among the special icons, there is the striker wild, and the stadium scatter icons. The wild substitutes any other icon except for the scatter and it acts as Grouped Wild when comes on reel 1 and 5. Ir doubles any win involving wild icons, and your total stake multiplies your wins formed with the scatter icons. The slot gives you chances to play with two different modes of gameplay. The Striker mode helps you to multiply the free games, while the Lucky mode activates the Lucky feature.

Here, you can get in up to 100x your current bet by kicking penalty shots. The feature is triggered when the bonus ball icons come on any symbol during free spins bonus feature. You can secure a gold bonus ball by scoring 2 misses or 8 goals. You can triple your prize money by kicking the golden ball.

Football Frenzy has brought the whole world of football into an online slot machine. Its progressive jackpot, base game payoffs and interactive bonus features make the game popular, especially among the football fans.