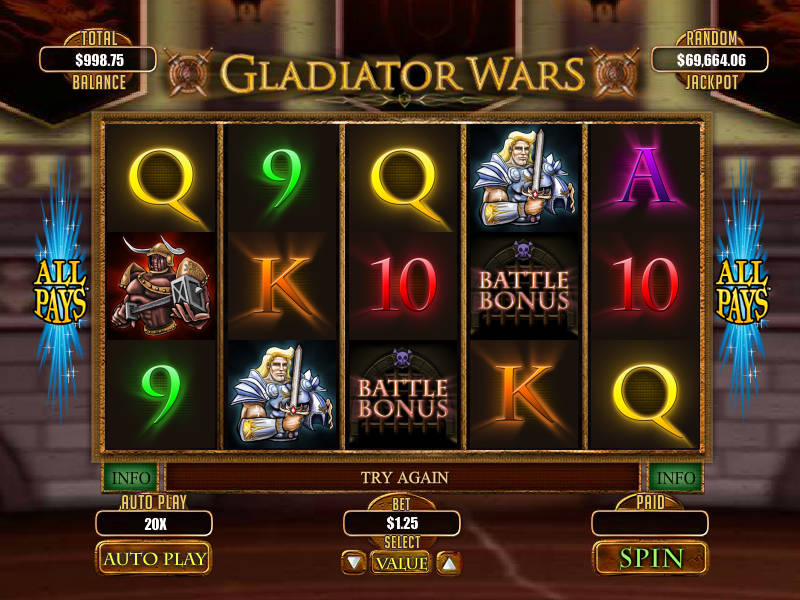 Real Time Gaming has brought yet another online slot machine designed on a historical theme. This time, RTG has introduced some furious gladiators from ancient Rome, and the fighters can help you to trigger some mind-pleasing cash prizes. It features wild and scatter icons that can make your slot experience greater by triggering cash prizes and bonus games.

The 5-reel slot comes with 243-ways-to-win setup, and here you can win a cash prize of 1,250 coins with the help of scatter icon. Along with this, you can spot a number of warrior icons on the reels that can also trigger some attractive cash prizes. Read More

Get Prepared for the Bloody Battle of Gladiators

The images of different warriors occupy the reels, and each of them can award cash prizes. Here, you can win 1,000 by landing five any of the warriors’ icons on a line with the max stake. The icon of the sword and the shield is the wild that replaces other icons except for the scatter to form winning combinations. You can receive highest wins if one or more wild icons replace other icons to form combinations. The icon comes only on reel number 2, 3 and 4.

Three or more scatter icons anywhere activate the bonus game. During the bonus game, you are shifted to Gladiator arena, where you have to choose an opponent to fight. The feature is over once you miss the chance to attack your opponent and lose the battle. You can win a large prize by defeating your opponent in this bonus game.

If you win the match, you are ready to fight with your next opponent where you enjoy the chance to attack your opponent for 8 times before you go for the next one. Here, you can face up to 4 contenders before you turn back to the regular game.

Gladiator Wars online slot takes us back to the ancient Rome where such bloody battles would take place regularly. Here, you can win a randomly triggered progressive jackpot, base game payoffs and plenty of chances to enhance your bankroll through the bonus feature.