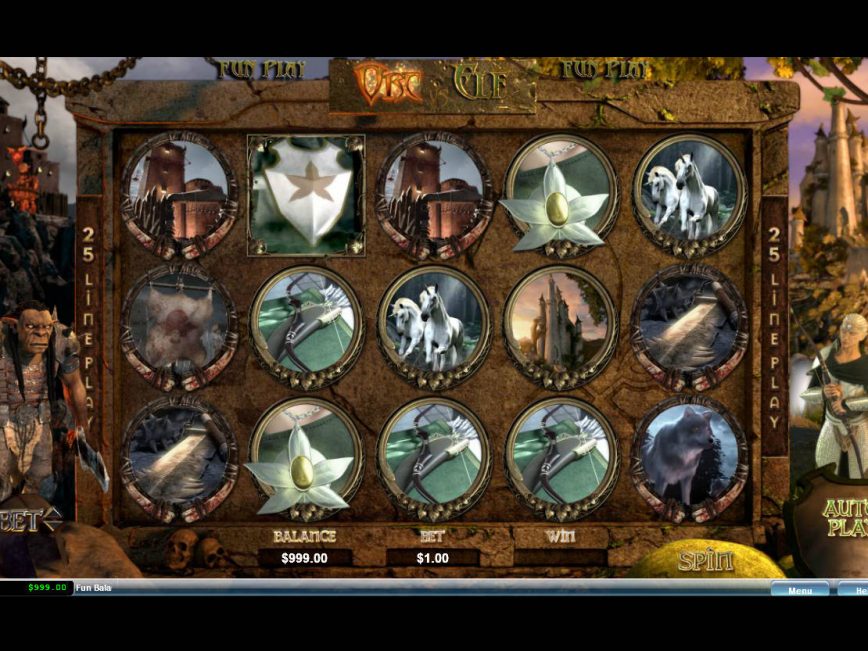 Orc vs Elf is a new slot game from the house of Real Time Gaming. The entire game is based on a battle between Orc and Elf.  The design of the game has similarities with the renowned Hollywood movie The Lord Of The Rings. You have to choose between Orc and Elf to proceed with the game. Once you decide the team, you can get many Orc, and Elf themed items Fight with the opponent, and you can get lucrative prizes at the end of the battle. Read More

The 5 reel online slot is designed with two main characters, Orcholme on one side and Elveros on the other side. The online slot is comprised of 25 paylines, and each one increases the possibility of your win gradually.

There are two special wildcards in the game, one is Orc, and another is Elf. Both works as expanding wilds, but Orc only works in reel 1, whereas Elf works as an expanding wild for reel number 5 for all symbols except the Orc shield. Orc and Elf are only counted for once on their reel for their scatters.

There are three special scatters symbols of Orc shield and Elf shield and Battle Bonus.

You have to come across 7 Orc features during the trail to the fortress of Orcholme.  On the other hand, there are seven Elf features on the road to the citadel of Elveros. You can accept the feature or move on. If you move on you can still avail the feature during your game later.

You can avail 5 free spins, and darkling symbols pay double.

It offers 6 free spins, and 2 scatter wins along with an extra spin.

It is similar to Hobgoblin feature, but Orc forts walk as additional wild whenever Orc appears.

Same like Orc army, only it adds an additional Orc to reel 1.

Same as Giant spins but it offers 7 free spins initially.

Same as Chaos spins but the last spin works as a super spin.

You can win 6 free spins

Same like woodland spins but an additional wild on your reel 2, 3 or 4 after the spin. An extra wild also applies here except scatters.

Same like Elf magic, additional 7 spins and Elf hunts the Orc army in reel 1. You can avail 200 times bonus to your bet.

Same like the Huntsman feature, but Elf targets the wolves throughout the reel.  If you can kill the wolf, you get a bonus up to 100 times your bet.

You can get 8 free spins and a superspin + a wild to reel 5.

You can also avail different battle bonus during the game that will help you increase your win accordingly. Even if you lose, you win a consolation reward that values 2x to 10x of your bet.

The first player to accrue three victory points is the winner of the game. The number of battle you played to win the game decides your reward, which is retriggering of the respective Road to Elveros features.

Brilliant graphics and great background score set the mood for the battle. The highest win per paid spin is 50,000 times bet per line. Go for it and grab some of the best rewards for playing this feature-rich slot.

Alice and the Red Queen